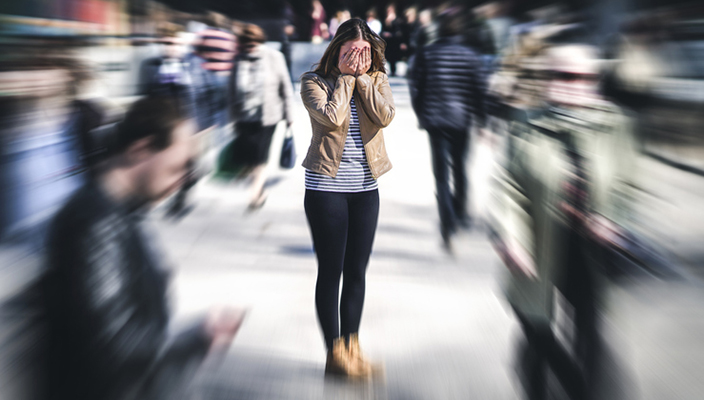 Judaism embraces the notion that we can all do and be better, and that it’s incumbent upon us, as Jews, to create this reality. Rather than relying on God to repair the world, Judaism compels us to take action and do it ourselves – which means that there can be a real sense of empowerment that comes with living a Jewish life.

There may come days, though, when all we can do is sit in shock at the acts of hatred and oppression that occur in the world around us. Each mass shooting, each act of unethical political warfare, each act of anti-Semitism, racism, and transphobia… they can leave us feeling overwhelmed, anxious, and skeptical of our ability to confront the challenges of tikkun olam, repair of our broken world.

We may even fall into the trap of thinking, “This is the new normal, and I’m just one person. What’s the point of even trying?” In times like these, it may help to remember the teachings of our Jewish faith and tradition.

When we feel overwhelmed by the world, here are three important teachings to bear in mind.

1. We are called to pursue justice.

“Do not be daunted by the enormity of the world’s grief. Do justly, now. Love mercy, now. Walk humbly, now. You are not obligated to complete the work, but neither are you free to abandon it.”

Indeed, justice, mercy, and humility are some of  the core tenets of Judaism, and these tenets aren’t electives we can simply shrug off as optional. We are literally called to be dedicated agents of justice, to look the world’s grief in the eyes and face it head on, even – and perhaps especially – when it feels easiest to just give up.

In his d’var Torah for Parashat B’har/B’chukotai, Rabbi David Lyon asserts that “humanity thrives in places where freedom from hunger, redemption from bondage of any form, and release from tribulations unleash our greatest human potential.” We are capable of anything we set our minds and hearts to – but, as he reminds us, our capability is often unearthed in the most seemingly hopeless of moments.

Consider this: When have you felt the most confident in yourself? Was it when things in your life were going relatively easily, or after you overcame something you thought would nearly destroy you, only to walk away feeling stronger and more resilient?

Your answer is likely the latter, and that’s because those moments serve as testimonies to our capability as human beings to accomplish goals we once only dreamt of. Our sacred pursuit of justice in the face of a torrent of unjust opposition is no different.

A revisit to the book of Micah reveals the following prophecy of transforming ya’ash (despair) into shalom (peace):

“…They shall beat their swords into plowshares and their spears into pruning hooks. Nation shall not take up sword against nation; they shall never again know war; But every [one] shall sit under [their] grapevine or fig tree with no one to disturb [them]…Though all the peoples walk each in the names of its gods, We will walk in the name of the Lord our God forever and ever” (4:3-5).

This passage includes a beautiful image of olam haba (the world to come) – but again, rather than being up to God to make into reality, it is destined to happen because we are to make it happen.

Jewish belief teaches that we’re all created b’tzelem Elohim, in the image of God. If the Holy One is ein sof (without end), as the Kabbalists suggest, then that means we, through the work we accomplish in creating a safer and more just society, are also without end – destined to live on through eternity as we continue to seek to make the world a better place.

Indeed, the Jewish people have survived for centuries, despite every odd against our favor. And although each generation of Jews has faced its own considerable share of sorrow and hopelessness, so, too, has each generation not only survived but left the world a little better than they found it. Why should our generation be any exception?

For more Jewish wisdom as it relates to everyday life, subscribe to Ten Minutes of Torah, weekday emails that bring the Jewish world to your inbox.