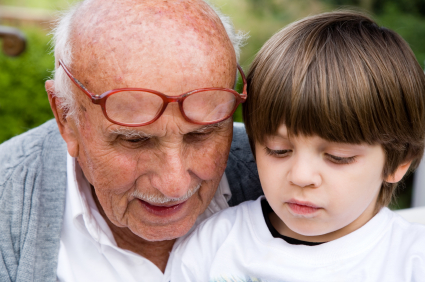 As grandparents, you want and need to tell your grandchild “who we are,” and you have a right to do so. It’s the how of doing it that’s so important and so difficult. In the real world you must be sensitive to the feelings of your non-Jewish son/daughter-in-law. You want, after all, to maintain the affection of your children as well as your grandchildren. Of course, that’s true even in a single-faith marriage. However, in some interfaith situations, you may have a bomb with a short fuse that can be touched off with what often seems to be no provocation. Remember, whether or not your son- or daughter-in-law has a justifiable reason for acting resentful, he or she does have the upper hand and can deprive you of seeing your grandchildren.

We must always remember that grandchildren are not our children. We’re not their parents. We’re not bringing them up. We don’t have the responsibilities, which means we don’t have the authority either. It is important for you to respect your adult children’s prerogative in raising their own children. Communicate with your children. Ask them how they feel you might improve your relationship with them. Offer to babysit the grandchildren for a weekend.

One of the most difficult things about grandparenting is learning to use diplomacy and tact. Perhaps you didn’t have the relationship you would have liked while your own children were growing up. Nature has given you a second chance. Don’t blow it!

You absolutely have the right—the obligation—to speak your thoughts. But think carefully before you speak and act. Much of the time, what you do isn’t nearly as important as how you do it.

We often know what we seek to accomplish, but aren’t sure how to go about it. You want to share your Jewish heritage and values with your grandchildren without offending your non-Jewish son- or daughter-in-law and without creating or exacerbating problems for your child. What to do?

First, never forget that the parent’s choice of a religious identity is a private affair in keeping with his or her personal needs. It is essential that the non-Jewish spouse understands you are not competing in regard to the religious instruction of the child. Though you may not agree with the choice, as a grandparent, acceptance of and respect for that choice will make your relationship with your children and grandchildren a more harmonious one. On top of that, you scarcely have an option.

Parents may choose to raise the children in the faith of only one of the parents, Jewish or non-Jewish. They may celebrate both religions, adopt no religious belief, or let the children choose their own religious affiliation at a later date. Even if the parents have not yet made a decision, because they can’t or won’t deal with the issue, that in itself is a choice—their choice. Whatever the choice, it has been made. You are dealing with an accomplished fact. You can’t change it. You don’t get a vote.

As a grandparent you would like to share your heritage with your grandchildren. But the first rule in attempting to transmit a feeling for their heritage to your grandchildren is: get permission from their parents. Play by their rules, and be sensitive to their feelings. Have the tact to back off if you sense resistance; tomorrow is another day. With luck, and tact, time may mellow things. Continue to develop warm, loving, non-censuring communication with your children. Let them know that, while your needs regarding family heritage are valid, you accept and respect their way of doing things in their home.

If you feel it would be appropriate, offer a specific written outline of what you propose. Actually negotiate a preliminary understanding with the parents and write it down for approval. This might seem like an off-the-wall suggestion, but in some situations it might make sense.

Your plan, projected over several months, could include talking to your grandchildren about who you are, relating memories of your parents and grandparents, where they were born and what their life was like. The second month could be spent in sharing the joy of the Sabbath with a grandchild. The next month could include a visit to a temple or synagogue. The following months could be spent in holiday fun celebration and preparations, visiting a Jewish exhibit, finding Jewish books in your local bookstore, and going to a Jewish concert or movie at the Jewish community center. Try to cover everything you might like to share.

Give the parents a list of the books you would like to give your grandchildren. And be sure to continually reinforce to the parents that you will adhere to what they feel comfortable with when you are telling their children about Judaism. A written outline may seem extreme, but it will let the parents know you are sensitive to their feelings and will allow them to hold you to your word if you try to push beyond the boundaries you’ve agreed to. It should give them a much higher comfort level, which makes things easier all around.