"Honor thy mother and thy father." It is a lesson we learn as children that sticks with us through adulthood. That is one reason why it can be so difficult to tell your parents that the man or woman you have fallen in love with and want to marry is of a different religious faith. It can feel as if you are dishonoring everything your parents instilled in you during childhood, a difficult feeling to deal with.

That was my personal experience. I met my husband, Jake, when we were teenagers. I do not think my parents ever thought the relationship would someday lead to marriage. But when it did I had to face the most difficult questions of my life. "Will the ceremony be Jewish or Christian?" "Are you still going to celebrate Christmas and Easter?" "What happens when you two have kids?" "Are you going to convert?"

Both families had their concerns as expected. At first we tried to be as diplomatic as possible, giving each side a bit of what they wanted, at least enough that they were not unhappy. For example, our wedding took place in Indiana where we met and instead of preacher, rabbi or both officiating we selected a Justice of the Peace, a neutral figure for both sides of the family. The wedding was held in a beautiful Victorian home that has become an historical landmark in our hometown, not a church or synagogue. We incorporated Jewish traditions such as the blessing over the wine (in English), the chupah and the breaking of the glass. It was harder to incorporate some Christian traditions without offending my husband and his side of the family, but the music was distinctly more Christian and my father sang a song for us during the wedding ceremony. Many compromises were made to be sure everyone could participate and enjoy the day. Life became a balancing act that began to take its toll on both Jake and myself, so when we decided to have children we knew that we could not keep up the act. Our decision to raise the children Jewish was long discussed and carefully thought out. Neither one of us took it lightly.

Being the person that I am, I began to read everything I could about Judaism. I wanted to be an informed and involved parent in my children's spiritual lives. The thought of my son or daughter coming to me one day with a religious concern or question that I might not be able to help them with, broke my heart. Much to my surprise, my research started becoming less and less about being informed for my children's sake and more and more about my own spiritual journey. Each book brought me to new revelations about my own beliefs and ideas regarding religion. After months of study I concluded that I identified more with Judaism than I ever had with my Southern Baptist upbringing. Everything I did kept leading me to choose Judaism for myself.

Telling my parents that I was converting to Judaism was one of the hardest things I have ever done. I wanted them to know that they did a wonderful job raising me and that it was because of the great job they did that I could do this for my family and me.

My parents are divorced, so I had to tell each of them individually about my desire to convert to Judaism. Telling my mother was less difficult. She and I have a very close relationship. Also, she lives nearby and was aware of all my studies. My mom was supportive of the things I was doing to help create a cohesive, happy family. She also found the information I passed on to her fascinating and commented more than once how it "made sense" to her. When it came time to tell her that I had made the decision to convert, I was still apprehensive. After all, this was a major shift from "I'm learning about Judaism" to "I want to be a Jew." I remember she had tears in her eyes, but she said I had to do what was best for my family and me. My mother was mostly concerned that she would not be able to relate to her grandchildren because she did not understand Judaism. In addition, she wanted to be able to share her joy during the traditional Christian holidays of Easter and Christmas. I assured my mother that while she might not understand everything the children do for the sake of Judaism, we would never alienate her because of her lack of understanding. Instead, I invited her to Shabbat dinner and synagogue services. We also agreed that since the children will always have relatives that are one half Christian, they need to grow up knowing and understanding what that means for them. So, we decided that although Easter and Christmas were holidays that would not be celebrated in our home, we would continue to go to my mother's home to help her celebrate these occasions.

Telling my father was so much more challenging for me emotionally. My father has always been much more zealous about religion than my mother. He was once an ordained deacon in the Southern Baptist church and enjoys singing contemporary Christian songs at worship services. When I was a young teenager I felt very close to my father religiously. I knew that when I had a biblical question or a need for prayer I could always ask my dad. Since my father does not live close to me he was much less aware of all the reading and studying I had done to learn more about Judaism. I tried to allude to my Jewish studies in phone conversations, but it never seemed appropriate to tell my father something this important over the phone. My face-to-face opportunity came while we were all vacationing in Florida. My father and his family have a house there. Jake and I had brought our infant daughter, Gloria, to stay and visit for a couple of days. My dad and I happened to be in the family room alone, so I seized the chance. My father was very calm about my revelation, much calmer than I expected. When he responded he told me that he knew that I must of done a lot of soul searching and studying to come to this conclusion because that is the kind of person he knew me to be. His only question was, "Do you still believe that Jesus is the Savior?" I suppose I expected this question, I had read as much as I could about Judaism's philosophies on the Messiah, but making an elaborate logical and theological argument at that moment did not feel right. In the end I simply said, "No, I don't and if you want me to tell you why sometime I will." When I said that, I think my dad was a little hurt. It certainly ended the conversation.

I'm still in the process of my conversion. It has taken longer than I had hoped, between babies being born and life in general, but both of my parents have been supportive in their own ways. My mother often comes over on Friday nights to enjoy Shabbat dinner with the grandchildren. Now that my daughter is three, my mom hears more and more about Tot Shabbat and the Jewish holidays. Gloria loves to share all she's learned with Nana. My father and stepmother are very conscientious about appropriate holiday gifts and often ask me questions about the meaning of the various Jewish holidays and traditions. When our son was born both my mother and father were excited to be a part of the bris. When new issues arise we talk about them, I often turn to books for guidance. So far there has not been an issue we could not handle.

I know my story is not unique. Many interfaith couples struggle with the very same issues my family and I do. However, between my own parents and my husband's parents our family has a wonderful support system. We are blessed. One thing that I am certain of is that being non-judgmental and keeping the lines of communication open is important. I never shy away from a question that is put to me by a family member (typically a biblical question) and if I don't have an answer, I say so. I think my family respects the fact that they can approach me with their issues and concerns, and together we learn and grow in our faiths. Being honest in any relationship is much more important than being right. 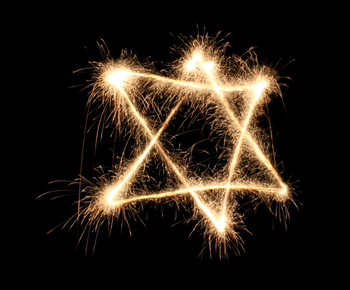