How We're Teaching Tzedakah (Charity) to Our Child

One Family's Formula for Allowance
An anonymous and proud parent
Image 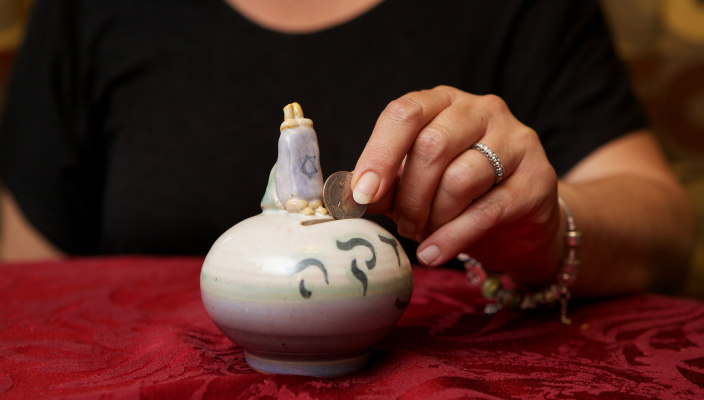 A few years ago, we were told about a system of children's allowances that helped them learn the value of money. We decided to try it, even though, at the time, the numbers sounded much too large for a child's allowance.

The system was to give a child an allowance of $1 for every year of the child's age. Of that amount, 60 percent went into a long-term savings account to be used in the future, e.g. college; 30 percent was allotted to "fast cash" (which is the equivalent of most children's allowances); and 10 percent went to charity, or tzedakah.

This system has worked well for learning the value of money. Our child has derived satisfaction from watching a college fund growing, having money to buy those "kids items" that seem so necessary at this age, and giving weekly to the tzedakah box in his religious school class.

But something a little different happened this year.

In the past, the 10 percent tzedakah money, accrued from the summer vacation, was automatically delivered to the first religious school class of the year. Not too much thought went into this; just a larger amount of tzedakah went into the box.

This year, though, our child let us know that he would like to choose where the tzedakah money from the summer would be used. He asked our opinion, and we spent some time discussing various agencies and their functions. We talked about a homeless shelter, a shelter for women and children, and the United Way. We also had picked up a an empty bag at Rosh HaShanah services to fill and return on Yom Kippur; our congregation delivers them to a food bank after the holidays.

Our child decided to spend the tzedakah money on food for one of the bags. At the grocery store, he picked up a cart and proceeded to select items, keeping in mind how much money he had and how to create the most nutritious combinations. (Of course, two packages of blue Jell-O were initially counted among the staples). At checkout, our 10-year-old pulled out 15 one-dollar bills and presented them to the cashier, who looked in astonishment at us as she asked, "Your parents make you buy your own groceries?"

His quiet reply was, "No, it's for the food bank."

All the way home and beyond, our conversation was about how many meals might come from the purchases we'd just made, and it evolved to how many people could be fed for an amount that might otherwise be spent on a toy.

There is no question in our minds that using this system for giving children their allowances teaches the value of money. More importantly, it has taught our child to be a member of the community, to be kind and generous towards others, and to understand that tzedakah comes from the heart.

Learn more about how to teach children about the importance tzedakah by watching "Get with the Giving," an animated video from Shaboom! that comes with an accompanying discussion guide for families.

An anonymous and proud parent
END_OF_DOCUMENT_TOKEN_TO_BE_REPLACED