The Saga of the Citron

This Sukkot, take the time to inhale the aroma of a citron - that giant, knobby, lemon-shaped fruit with thick, dense skin - and you'll encounter an exhilarating fragrance. It may be almost inedible - bitter and dry, with little pulp or juice - but its unique scent of lemon and lime and its ever-bearing tree have endowed this native plant of northeast India with curative and ritual status. From ancient through medieval times, people utilized the fruit as a remedy for everything from snakebites and seasickness to muscular pain and skin disease.

The citron was first esteemed by the ancient Hindus as a symbol of prosperity, perhaps because of its generous size (the Hindu god of wealth, Kuvera, is always shown holding a citron). The fruit reached China sometime in the fourth century CE, at which time the many-lobed ornamental variety called the Buddha's Hand (when its finger-like lobes are closed, the fruit resembles a hand in prayer) became revered as a symbol of happiness. To this day, Buddhists value the citron as a religious offering in both temple and home altars.

It is not known when the Jews first encountered the citron (etrog in Hebrew), though scholars believe that Jewish exiles in Babylonia brought it back to Palestine sometime before 600 BCE. During the Second Temple period (515 BCE to 70 CE), when Jews regarded the harvest festival of Sukkot as the most important holiday of the year (so much so that Sukkot was known simply as HeHag--The Festival), the etrog was a freqeunt motif on coins and synagogue mosaics of the time.

It remains a matter of debate when exactly the etrog was adopted to fulfill the Torah commandment to "take the fruit of a beautiful tree" during Sukkot. Though it has been proposed that the biblical "fruit of the goodly tree" was originally  a different fruit, later replaced by the citron, most scholars have rejected this theory on the grounds that Jews of the era were very conservative in adhering to religious traditions.

Why the etrog? Again, this remains a matter of scholarly speculation. In advancing proofs that the etrog was indeed the "fruit of the goodly tree," and perhaps even the fruit eaten in the Garden of Eden, the rabbinic authors of the Talmud asserted that since both the fruit and the tree had flavor, the etrog met both qualifications of the phrase, the tree being as "goodly" as the fruit. One rabbi demonstrated that the numerical value of the phrase "fruit of a goodly tree" was the same as the word etrogim, the plural of etrog. Still others compared the tapered oval shape to a heart, thus justifying its standing as the heart of the festival's prayer.

Etrogim through the Ages

Having chosen the citron to fulfill the mitzvah of Sukkot, the Jews cultivated the fruit wherever they settled. After the fall of Jerusalem in 70 CE, exiled Jews planted citrus orchards in Europe (Spain, Greece, and Italy) as well as in North Africa and Asia Minor. Some food experts have linked the Jewish demand for the etrog to the development of Mediterranean citrus (derived from "citron") culture, as the citron was the first fruit to be cultivated in Europe.

Jews who resided in communities north of warm citron-growing areas were dependent on imported etrogim, which caused them much anxiety given the dangers and uncertainties of sea travel. Obtaining the fruit became even more difficult in the sixteenth century, when a series of rabbinical edicts forbade the use of citron from grafted trees. As grafting was widespread in Italy, Jewish communities had to find new sources. By the seventeenth century some of the most popular sources were Spanish Catalonia and the islands of Corsica and Corfu. At first, the citrons of Corsica - where wild, ungrafted fruits grew abundantly - were the most prized, but as a result of political instability in the region, in the early 1800s the Ionian island of Corfu had taken Corsica's place as the wellspring for  pure, ungrafted citrons. The father in Sholom Aleichem's story "The Esrog," checking the quality of the etrog he is about to buy, asks, "But is it from the island of Corfu?" and is reassured: "Nowhere else but from Corfu!"

Corfu's status as the standard by which all other etrogim were measured began to diminish in the mid-century, when it was discovered that cultivation standards had lapsed and that merchants had been dumping etrogim into the Adriatic in order to create an artificial shortage and raise prices. Decades later, antisemitic uprisings on the island, by then a part of Greece, led to rabbinic edicts prohibiting the ritual use of etrogim from Corfu and a worlwide Jewish boycott. A ritual murder accusation and subsequent pogroms against Jewish residents in 1891 would put an end to the reign of the Corfiot etrog. The attempt by citron growers in Corfu to market the fruit to American Jews met with protestations and failure. An 1892 broadside published in the United States labeled the New York dealers in Greek etrogim "traders in the blood of Israel."

Jewish communities in Europe and America then turned to Palestine, where etrog farmers had been marketing etrogim to Europe since the late 1850s through The Fruit of the Goodly Tree Association. Some Jewish communities, such as the Sephardim, still preferred citrons from Italy, Greece, Morocco, or Yemen, but most Jews seeking citrons turned to Eretz Yisrael, the land of Israel.

The etrog would acquire a special cachet among the Jews of Eastern Europe - many of them impoverished - perhaps because of the imported fruit's significant expense. They stored their etrogim in finely crafted, flax-lined boxes of silver and wood to protect them and prevent them from drying out during the seven days of the holiday, as only a fresh fruit could be used in the blessing. And so it was that Sholom Aleichem likened the etrog to "a diamond or a rare gemstone or a cherished heirloom which has been entrusted for safekeeping, as precious as life itself...swaddled in flax, as one would a delicate child..." Many Jewish immigrants considered the etrog box one of their most prized possessions, bringing these boxes to America along with their Shabbos candlesticks and Havdalah spice boxes.

Folk wisdom endowed etrogim with special powers related to fertility and childbirth. The Talmud advised a pregnant woman to eat the etrog after the holiday so she would have a "fragrant" child - the equivalent of a "good" child. In the shtetl, a childless woman who wanted to bear a son was advised to bite the tip of the fruit. A woman in labor was advisd to place the tip under her pillow to ease the pain of a difficult childbirth.

My grandmother, who emigrated from Russia to Rock Island, Illinois in 1912, always used her post-Sukkot etrog to make marmalade, which she gave to postpartum mothers. My mother was the recipient of a least one of these jars of "etrog jelly," and she makes a marmalade from lemons (a descendant of the citron) to preserve the custom.

Etrogim in the Twenty-First Century

These days, American Jews continue to import the majority of their holiday etrogim from Israel, grown mostly by the Ludmir family on seventy-four acres of etrog groves in Bnei Brak. Their company, The Central Israel Etrog Co., supplies some seventy percent of Israel's etrogim and exports about 100,000 etrogim to the U.S. each Sukkot season - that is, except every seventh year, when the Ludmir family observes sh'mita, the Jewish law requiring the land to lie fallow. During sh'mita years, the most devout Jews will buy etrogim from Italy, the Greek islands (including Corfu), Morocco, Yemen, and in recent years California.

Only one grower in the United States has successfully harvested significant numbers of etrogim. For more than 20 years, John Kirkpatrick, a Presbyterian who farms near the town of Exeter in the San Joaquin Valley, has cultivated some 250 citron trees under rabbinical supervision. He also tends 35 acres of lemons and tangelos, but says that the two acres of etrogim take most of his time. Religious regulations prohibit grafting etrog trees onto stronger, disease-resistant rootstocks, so the trees are short-lived and vulnerable to disease and frost. Add to this the highly labor-intensive process of growing and selecting the fruit. Using a magnifying glass and a mirror, Kirkpatrick and his employees cull any blemished or imperfect fruit through the growing season and protect each promising etrog in an individual cloth bag secured to a branch. Of the 100,000 immature etrogim, about 12,000 are cultivated to full size; after sorting and grading, only 2,000-4,000 are good enough to sell for ritual use in the extremely brief time period prior to Sukkot. David Wiseman of Dallas, who markets some of Kirkpatrick's citrons through his company Zaide Reuven's Esrog Farm, says of the endeavor: "You've basically got to be crazy to do this."

This isn't the first time the Jewish obsession with the etrog has been called crazy. Writing for Commentary in 1958, Erich and Rael Isaac cited a fourth-century Christian bishop who called it both shameful and foolish for the Jews to make such a fuss over a lemon. The Isaacs rejected such arguments. "A symbol of world history and Jewish national persistence, a finite object in the natural world revealing God's divine and infinite mystery, the etrog is clearly an object of the highest significance," they wrote. "To the Jew it is a tree rooted in eternity, its creation antedating man; a tree from whose branches sprang the fruit which, in bringing the end to man's sojourn in Eden, gave us human life and history as we know it."

To fulfill the mitzvah of selecting a beautiful fruit, follow these guidelines: 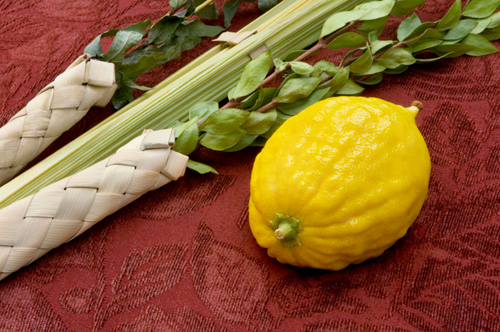