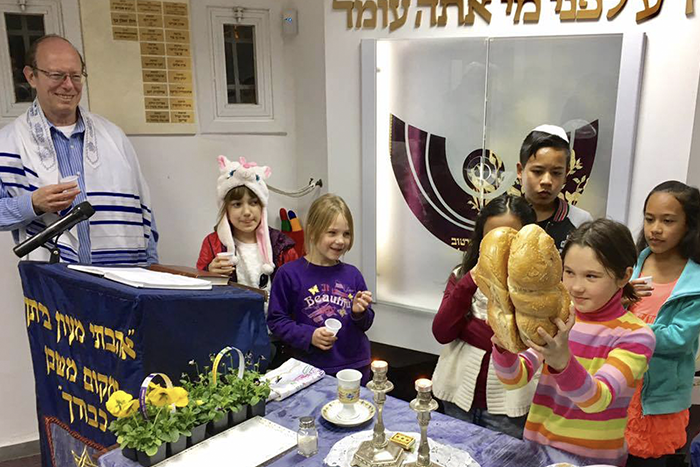 Polls show that nearly 25% of Israeli Jews choose Reform as the Jewish movement they most closely identify with. That may explain why the Israeli Movement for Reform and Progressive Judaism (IMPJ) is growing so rapidly. In the last three years alone, 12 new Reform congregations have been established, many in smaller cities and towns as well as on kibbutzim. Meanwhile, long-established Reform congregations within Israel's larger cities are forming satellite congregations. All told, 50 Reform congregations are now active in every corner of Israel, from the Galilee in the north to the Arava in the south.

And our Israel Movement is expected to continue growing, to accommodate all who seek a Progressive belief system that integrates traditional and modern values; conducts Jewish rituals in a fully egalitarian way; and works toward social justice reflecting Judaism's highest prophetic character, which calls for freedom, equality, and peace among all the inhabitants of the land.

The IMPJ's public and legal advocacy arm is the Israel Religious Action Center (IRAC), which for the past 25 years has served as Israel's preeminent civil and human rights organization, championing democratic and societal change, including women's rights and full religious equality for all streams of Judaism (official recognition, funding, equal status for non-Orthodox rabbis, institutions, and communities). As one example, this past March (2017), IRAC issued a comprehensive report on the promotion if a Jewish-Arab shared society in Israel’s health system, following extensive research on how and why co-existence succeeds in this field and how it can be translated into greater Israeli society.

Israel's Reform congregations are diverse. Some primarily serve Russian or Spanish-speaking Israelis, such as Kehillat “Shirat HaYam-Carmel” in Haifa and Kehillat “Emet v’Shalom” in Nahariya. Others are best known for their creative or musical worship services, special women's programs, lectures and study sessions, outdoor services, early childhood education, and offerings for children and adults with special needs.

All the congregations are homegrown. Participants are both sabras (native born Israelis) and olim (newcomers). Congregations strive toward a natural synergy of the highest ideals of both Progressive Judaism and Israeli society, and the Israeli experience is manifest in Israeli prayer books, traditions, issues, insights, and rituals. In general, Israeli Reform Judaism tends to be more traditional than in the Diaspora. A Progressive Beit Din (religious court) regulates conversion procedures and guides other ritual matters. Nonetheless, at services you will hear familiar prayers and melodies-and be warmly welcomed to your spiritual home away from home.

ARZA-the Association for Reform Zionists of America- works in partnership with the Israel Movement for Reform and Progressive Judaism and the Union for Reform Judaism to support and strengthen the growing Reform Movement in Israel. ARZA's member households (22,000 to date) are eligible to vote for World Zionist Congress (WZC) delegates, enabling the U.S. Reform community to advocate for a pluralistic Israeli society. ARZA also spearheads initiatives ranging from targeted emergency campaigns to aid Israeli war victims and rebuild damaged property to sponsoring celebrations of Reform Israel Shabbat, often in collaboration with the URJ and other Reform organizations.

Reform congregations in the Diaspora can connect to their Israeli counterparts through ARZA's Mifgash program, which facilitates Israeli worship experiences, a deeper understanding of the IMPJ's strides in Israeli society, and informal encounters with Israeli Reform leaders and congregants. To support ARZA's work and ensure the Reform Movement remains well represented in Israel politics, join ARZA, the primary connection to Israel for all American Reform Jews, before the 2014 WZC elections. For more information: arza.org, ARZA@ARZA.org, 212.650.4280.