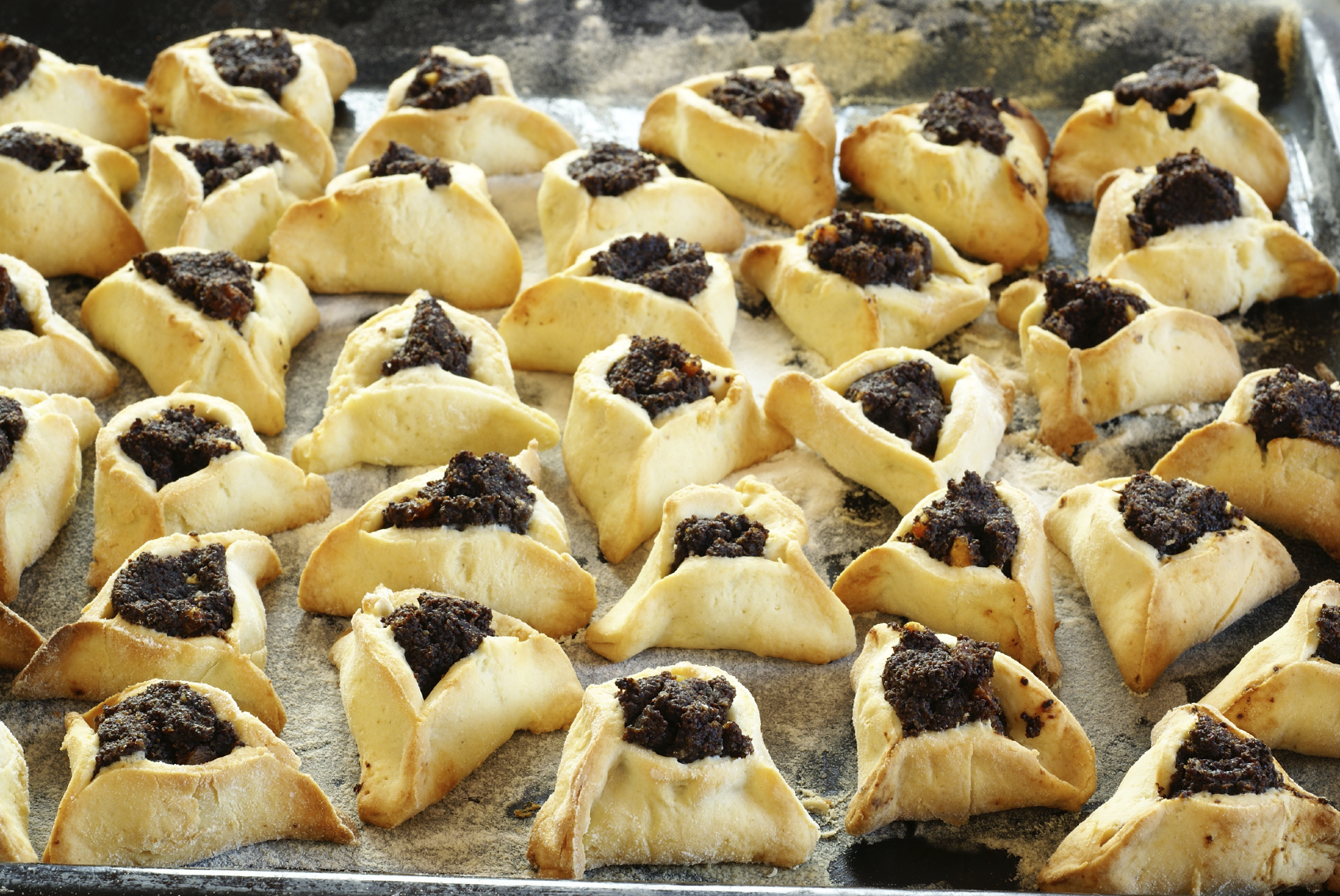 In the Book of Esther, we read that Purim is a time for "feasting and merrymaking," as well as for "sending gifts to one another and presents to the poor" (Esther 9:22). In addition to reading the M'gillah (Book of Esther), celebrants dress in costumes, have festive parties, perform Purim spielsPurim spielפּוּרִים שְׁפִּילHumorous play performed as part of the celebration of Purim. , send baskets of food (mishloach manot) to friends, and give gifts to the poor (matanot l'evyonim).

Hamantaschen (Yiddish for Haman's pockets) are three-cornered pastries filled with poppy seeds (mohn in Yiddish), fruit preserves, chocolate, or other ingredients that are traditionally eaten on Purim. In Israel during the weeks leading up to Purim, the aroma of freshly baked hamantaschen can be smelled on every block. Their triangular shape is thought to be be reminiscent of Haman's hat or ears.

As part of the carnival-like atmosphere of Purim, many children and adults wear costumes. Some attribute this tradition to the fact that Esther initially “masked” her Jewish identity. Now a vibrant and widely practiced custom, some choose to dress as characters from the Purim story, while others select Jewish heroes from throughout history.

In Israel, the celebrations are especially extravagant and exciting.  People of all ages take to the streets, rejoicing with parades, parties, costumes and carnivals. The parade through the streets of Tel Aviv is known to be especially wild. At the Kotel (the Western Wall) volunteers for Women of the Wall read M'gillat Esther in the women’s section.

The M'gillah (scroll) most often refers to M'gillat Esther (The Scroll of Esther) which also is known as the "Book of Esther." According to the TalmudTalmudתַּלְמוּדThe Jewish legal work that comprises the Mishnah and the Gemara. There are two works of Talmud: The Palestinian Talmud was compiled between 200-450 C.E. in the land of Israel and is also called the Jerusalem Talmud or Talmud Yerushalmi. The Babylonian Talmud or Talmud Bavli was compiled in Babylonia between 200-550 C.E.   , "The study of Torah is interrupted for the reading of the M'gillah." Maimonides, a 12th century sage and rabbi, teaches, "The reading of the M'gillah certainly supersedes all other mitzvotmitzvahמִצְוָהLiterally, “commandment." A sacred obligation. Jewish tradition says the Torah contains 613 mitzvot Mitzvot refer to both religious and ethical obligations. ."

Traditionally, the Book of Esther is read at both evening and morning services on Purim—both in North America and in Israel. A number of customs are associated with the reading. Haman, the enemy of the Jews in this story, is associated with all those who have tried to destroy the Jewish people throughout history. Therefore, we make loud noises—verbally or with noisemakers—at every mention of Haman’s name in order to drown it out. Derived from the Polish word meaning “rattle,” a grogger is the noisemaker used to drown out the name of Haman during the reading of the M'gillah. Beginning in the 13th century, Jews throughout Europe sounded the grogger as a part of their Purim celebrations.

A Purim spiel is a humorous skit presented on Purim. Most parody the story of the Book of Esther, but it also is common for participants to take the opportunity to poke some gentle fun at themselves and their idiosyncrasies. Some congregations run an adults-only event for Purim, too.

Mishloach manot are gifts of food that friends (and prospective new friends!) exchange on Purim. Often presented in baskets, most mishloach manot include hamantaschen, the traditional three-sided pastry eaten on Purim, but may also include a wide variety of foods and treats. These gifts are frequently referred to by their YiddishYiddishיִידִישׁJudeo-German language combining old German and Hebrew spoken by the Jews of Eastern Europe. Also known as "Jewish."  name, shalachmanos.

Jewish families make mishloach manot baskets at home and distribute then to friends. Many families also make hamantaschen to include in these baskets and to enjoy at home. Check out these creative ideas for making your own.

Matanot l'evyonim (gifts to the poor) are gifts given at this season to those in need so that they, too, can celebrate Purim with a special meal. Many families have committed to participating in this important social justice aspect of the holiday.