The title of your new book, How the Bible Became Holy, implies that the Bible wasn't perceived as holy—in other words, authoritative—from the outset. Is that right?

Yes. The standard perspective has long been that the biblical texts become authoritative, more or less, at their moment of composition. This prevailing view is based primarily on the Bible's own strong claims to authority. My own research into the subject, however, points to different and more complex conclusions.

For starters, we need to think more expansively about what it means to say that the Bible was "authoritative." The texts that ultimately became part of the Bible were understood by different readers in very different ways. I label the three main kinds of authority that various readers gave to the texts as normative, literary, and oracular.

In the biblical context, normative authority is taking or justifying an action because "the Bible says we should do it," such as when we apply the commandment "Love your neighbor as yourself" in our interactions with others.

Literary authority is the common phenomenon of authors using earlier texts as models for new ones.

In ancient Israel, there was a professional class of scribes. While they mainly performed the mundane work of bureaucrats, they also formed a kind of literati, a professional class who read each other's works and wrote for one another. As part of their training, scribes regularly copied and modified earlier texts. Thus, many of the biblical texts began as scribal exercises, not as the normatively authoritative law codes they claimed to be. Exodus 20-23, for example, which contains what scholars call the Covenant Code, was originally written as a scribal exercise. Later scribes drew and improvised on that text as part of their own training—and this became the core of the Book of Deuteronomy. Few outside of the scribal elite would have even known these texts existed!

The third kind of authority, oracular authority, is the idea that the text contains a message from the Divine realm, usually about the future. Throughout antiquity, this was the primary sense in which the Bible was perceived to be "holy." When, for example, Hosea prophesied the destruction of Israel's Northern Kingdom in the eighth century B.C.E., he turned out to be right, and his book was therefore preserved. Most prophesies that turned out to be wrong were rejected, although a few sneaked by.

How do we know that the Jewish people did not initially perceive the Hebrew Bible as holy in the normative sense?

Simply, most Israelites and their immediate descendants (they begin to call themselves Jews after the fifth century B.C.E.) could not read. The literacy rate was exceedingly low throughout antiquity. This does not necessarily mean that the people did not know of these scribal texts or did not hear them recited by others, but even if they knew the biblical stories, it would not have been because the stories were in the Bible; the people would have learned them solely orally. They would not have heard these texts recited at the Temple, which performed its sacrifices in silence; synagogues did not exist in the land of Israel before the first century C.E. And it is improbable that people in antiquity, who gave authority to established custom—doing what their family and village had always done—would have undone their traditions based upon an oral tradition that also appeared in a text they couldn't even read. More specifically, little evidence exists from all of antiquity that Jews consulted texts for their normative behavior. In fact, the Bible is replete with countless examples of precisely the opposite—people ignoring biblical rules.

Furthermore, we possess a significant number of legal papyri written by Jews in Egypt in the second century B.C.E. to first century C.E., and not one demonstrates awareness of a distinctive Jewish law, even though by that time other writings show they had begun to acquire some knowledge of biblical texts. Even by the first century C.E., when synagogues arrived in the land of Israel, knowledge of scripture was spotty and its authority did not yet displace custom. Jesus, for example, had very limited knowledge of scripture.

Did the Jewish leadership ever attempt to give normative authority to some biblical texts?

In the seventh century B.C.E., Josiah, the king of Judah, instituted a policy of religious reforms that he based on his discovery of an older text that had been found during renovations of the Jerusalem Temple. Notably, this text was the core of Deuteronomy, which up to then had been buried away in the Temple unknown and unread. The biblical account is biased-it's all too clear that its author wished to promulgate Josiah's call for centralizing religious worship around the Temple and eliminating images of deities ("idols")-but even the subjective author had to admit that Josiah's reforms quickly failed, cast off even by his own son.

Fast forward 200 years or so to Ezra the scribe, who returned to Jerusalem from Babylonia in the middle of the fifth century C.E. A functionary of the Persians, who had recently conquered Babylonia, he arrived in Jerusalem armed with a copy of something resembling part of our Torah (scholars debate exactly what) and attempted to use its authority to dissolve the intermarriages he opposed. The Book of Ezra makes clear that Ezra's efforts went nowhere.

What changed so that the Torah began to have normative authority?

This accepted way of doing things was upset in the second century B.C.E. with the Maccabean revolt, which led to the establishment of the Maccabees and their descendants, the Hasmoneans, as priests and then also as kings of Judea. The Hasmoneans, who coalesced into a group known as the Sadducees, did not trust the Pharisees, the older, established aristocracy that controlled the Temple ritual. The Sadducees used texts to argue against custom and prove that the Pharisees risked provoking God's anger by not following protocols of ritual purity in the Temple.

The Sadducees were largely victorious in this power struggle, and as a result they began to disseminate the idea that the Torah had normative authority. By the first century C.E., synagogues began to appear in Sadducean Jerusalem, and from there spread to other parts of Judea and Galilee. In the synagogues Jews began to hear these texts for the first time.

About a century after the destruction of the Jerusalem Temple in 70 C.E., the Pharisees and Sadducees melded together into the group that called themselves the rabbis. For the rabbis, little was more important than Torah, by which they meant God's full revelation, both written and unwritten. A Torah scroll was not thought of as containing text to be readily read and consulted, but as an object so holy it had to be made practically inaccessible. We see their influence today in the reverent way we treat Torah scrolls, which are not simply pulled out to read at leisure. A Torah scroll is more important as a sacred object than it is as a text. When someone wishes to consult the Torah for content, s/he will pull out a printed book, not the Torah itself.

In time, over succeeding centuries, the Bible, along with rabbinic literature, became increasingly authoritative among Jews. However, multiple similar versions of it were circulating, and when dealing with normative authority, even small differences could be significant. It took until in the 11th century C.E. for Jews to finally agree on the exact version of the Bible we have today.

You said that oracular authority exerted the greatest force in ancient times. How so?

Oracular authority both venerates a text and uses that text to assign power, prestige, and authority onto its interpreters.

This kind of thinking was commonplace in the ancient world—indeed, it led to the formation of most of the world's major religions. In Christianity, for example, the question of who had the authority to interpret the true meaning of scripture created the crisis that led to the Reformation and the development of Protestantism.

How did the rabbis use their interpretive authority?

They claimed to possess the skills to unpack the true meaning of the Divine text.

One example can be seen in the rabbis' interpretation of the biblical command, "You shall not cook a kid in its mother's milk," which occurs in the Torah out of any clear context. Claiming for themselves the authority of interpretation, the rabbis concluded that God was commanding the Jewish people to separate all meat—such as that of a kid—and dairy products.

Yes. Oracular authority needs a community of interpreters, acknowledged experts who reveal the true meaning of a puzzling text. I see that in the U.S. Supreme Court, where the Constitution is often treated as a kind of sacred text whose real meaning is revealed by the Court. Any time a group puts a text at its center and then gives power to a smaller group to interpret it, we are seeing the impact of oracular authority.

And nowadays normative authority exerts a stronger force in the secular arena than it ever did. The U.S. is a nation of written laws, from the Constitution on down, and its citizenry naturally conflates writing, authority, and law. The very idea of a nation that can be built around a text grew out of the deep respect its founders accorded the authority of texts. Americans are extraordinarily diverse—and without this commitment to such authority, I wonder if we could function together
as a single people.

Texts also exert a strong influence on our daily lives. In the workplace, for example, many of us are expected to follow memos and mission statements. At home, we often cook from written recipes. And in the synagogue, when praying, we typically use a siddur (prayer book).

In antiquity, in contrast, it was rare for texts of any kinds—even civic ones—to be considered normative. The personal, normative authority of a text is largely a rabbinical idea.

Are you saying the rabbis were largely responsible for the normative authority we take for granted today?

Yes. It was the rabbinic interpretive approach to biblical texts, developed over millennia, that elevated the authority of texts above that of custom.

In our own time, texts are so integral to our communities and lives, it is sometimes difficult for us to imagine a world in which they played little or no role. This is perhaps the Bible's greatest legacy: the radically implausible notion that one can build a community, a religion, a culture, and even a country around a text.

Michael L. Satlow is professor of Religious Studies and Judaic Studies at Brown University. He lives in Providence, Rhode Island, with his wife, Jacqueline Satlow, a Reform rabbi, and their three children. 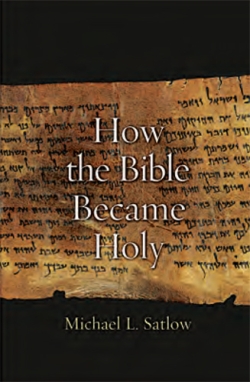