Philip Roth (1933-2018), one of the most prolific and acclaimed authors in the history of American literature. He is the recipient of the Pulitzer Prize, the National Book Award, and the Man Booker International Prize. In his complicated private life, Roth was often an unhappy man. Ira Nadel’s comprehensive biography, Philip Roth: A Counterlife (Oxford University Press), draws connections between the seminal moments in Roth’s life and the characters and themes in his novels that reflect his inner turmoil and reveal what was behind Roth’s carefully orchestrated exterior.

Nadel uses primary sources, interviews, archival information, and Roth’s personal correspondence to compile a portrait of his subject’s “counterlife” according to the “instructions, directions, and even guidelines for his biographer, seeking to control how his story was presented.” Roth was a perpetual micromanager.

Born and raised in hardscrabble Newark, N.J., Roth developed a strong Jewish identity combined with a pugnacious demeanor that would manifest in many difficult personal and professional relationships over the years. It may not be a coincidence that his time in Newark (1910-1940) intersected with the “Golden Age of the American Jewish Boxer.” Roth, his father, and his brothers attended matches frequently.

Roth had an adversarial relationship with his father, a hard worker who suffered several business failures. In his school days, he sought refuge from his domineering father at the local library. He would later create the character of Neil Klugman as a librarian in Goodbye, Columbus and would return to the library of his youth whenever time allowed. Nadel writes: “The information desk where Neil Klugman gives advice to the young African-American seeking a work on Gaugin in Goodbye, Columbus still stands on the second floor.”

Nadel traces the origins of Roth’s talent and personal travails from this student years through his years as a teacher and  best-selling author, to his final years as a man ravaged by illness and rage to the degree that he lost the motivation to write.

Roth’s relationships with women bordered on the scandalous. His first marriage to Maggie, a single mother who convinced him to marry her after she announced (falsely) that she was carrying his baby, was fraught with years of tension and philandering, including some of his much younger female writing students. His tempestuous marriage to actress Claire Booth was fodder for gossip columnists. Nadel writes:

“Roth’s attraction to needy, unhappy women – Maggie, Ann (Mudge), and even Barbara (Sproul) – is paradoxical. As they became more dependent on him, perhaps their initial appeal to him and his desire to ‘rescue’ shared with his father, he felt compelled to pull back, if not reject them… The paradox is that he was drawn to needy women, but over time their needs repelled him – needs he may have seen in himself…”

In contrast to his relationships with the women he fell in love with and then abandoned, Roth’s friendships with fellow authors such as Edna O’Brien, Saul Bellow, Primo Levi, and Isaac Bashevis Singer provided a satisfying human connection.

His breakout novel, Portnoy’s Complaint, published in the sexually charged 1960s and remaining on the bestsellers lists for 40 weeks, came at a time when he was willing to take chances, or “let it rip,” as he told Scott Raab in a 2010 Esquire interview:

“… Roth explained that in reaction to the tempered prose and modulated voices of [his earlier books] Letting Go and When She Was Good, he veered in another direction: the theatrics of the 1960s, his own psychoanalysis, and the times gave him the internal permission to ‘let it rip.’ The mixture gave him confidence to write wildly, unleashing a high velocity nozzle of style where the spritz, not the paragraph, becomes the signature form.”

With Portnoy, Roth explained in an interview with George Plimpton, his “goal was to become the writer Jewish critics had all along told him he was: irresponsible, unserious, perverse, and, finally, unsympathetic … it’s not Lenny Bruce or Mort Sahl who influenced him, not those stand-up comics, but the ‘sit-down’ comic Franz Kafka and ‘The Metamorphosis.” Portnoy was well received by many, but panned by The New York Times and others, and received several scathing reviews, such as  Judaic scholar Gershom Scholem, who wrote in Ha’aretz that “Portnoy was the book for which all antisemites have been praying.”

Readers of Roth’s work may find this character study a fascinating complement to his writings. Behind the pages of his books was a troubled man who strove to keep his counterlife undercover. 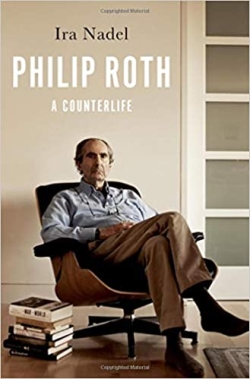