Three U.S. accounts – Judgment at Nuremberg (1961), Nuremberg (2000), and The Nuremberg Trials (2006) – present the IMT as a triumph of the American justice system. But Soviet participation in the trial, if noted at all, is usually portrayed as negative, crude, and obstructionist.

Indeed, at the time many Americans believed the USSR should have been tried for its own criminal behavior, especially the wartime massacre of 22,000 Polish military officers in the Katyn Forest; the Soviets falsely claimed the Nazis committed the slaughter. In addition, in August 1939, the USSR and Nazi Germany signed a non-aggression pact that divided Poland between the two dictatorships and gave Hitler the green light to invade Poland a month later, launching World War II.

Francine Hirsch, the Distinguished Achievement Professor of History at the University of Wisconsin-Madison, has written a brilliantly researched, compelling narrative, Soviet Judgment at Nuremberg: A New History of the International Military Tribunal after World War II, that shatters the negative perception of the Kremlin’s role in the Nuremberg Trial. She asserts the USSR was central in establishing the pioneering legal framework required for the IMT.

Hirsch spent 15 years studying an extensive body of documentation, much of it in Russia, that reveals the Soviet role in making the trial in Nuremberg a reality.

The four powers each had a different experience in WWII. The Soviets, invaded by Nazi Germany in 1941, suffered the deaths of nearly thirty million people. The German invaders destroyed 1700 villages as well as obliterating USSR infrastructure. The destruction far exceeded the losses of France or Britain, which had also suffered significant losses from direct Nazi assaults.  The United States, its land mass untouched by German attack or occupation, suffered the least destruction.

Hirsch’s “hero” is Soviet Jewish legal scholar Aron Trainin, who, early in WWII, developed new criminal concepts, including “crimes against the peace,” “crimes against humanity,” and “wars of criminal aggression.” Trainin’s groundbreaking categorizations were ultimately accepted by the three western democracies. Another contemporary innovator was Raphael Lemkin, a Polish Jew who coined the term “genocide” to describe the Nazi campaign to exterminate entire peoples. The USSR Purge Trials of the 1930s provided background for Soviet IMT participation. Psychologically and physically broken defendants at the Moscow trials publicly confessed to all charges and were quickly executed. Stalin desired the same outcome at Nuremberg.

“The tribunal the Soviets thought they were calling for, however, was not the tribunal they wound up with,” Hirsch writes. “They had no idea what they were getting into at Nuremberg.”  To the surprise of the four powers, all the defendants, including Hermann Goering, Joachim von Ribbentrop, Albert Speer, Rudolf Hess, and Julius Streicher pled “not guilty.” German lawyers mounted a vigorous defense, charging that the Nuremberg process was “victor’s justice” and that the defendants were just following the state’s legal orders.

The chief American prosecutor, Supreme Court Justice Robert Jackson, did not want the Soviets involved at Nuremberg, an early sign of the fissures in the emerging Cold War.

The four judges announced their verdicts in October 1946. Of the total of 24 defendants, 11 were condemned to death by hanging. One of them, Hermann Göring, escaped the noose by swallowing a deadly cyanide pill the night before his scheduled execution. Ten defendants received prison terms, including Hess and Speer.

Three were acquitted: radio propagandist Hans Fritzsche, former German chancellor and WWII ambassador to Turkey Franz von Papen, and Economics Minister Hjalmar Schacht. The three Western judges found that Schacht had “facilitated …Germany’s rearmament and military resurgence … [but] rearmament itself was not a criminal act…” Papen, they argued, had used ‘intrigue and bullying’ to bolster the Nazi party…but this was not a crime…and the prosecution had not established that he had been involved in any war plans.” In the case of Fritzsche, the three judges held that he  “…had not been one of the key formulators of Germany’s propaganda policies…[although] he had spewed anti-Semitism, he had not directly called for the persecution of the Jews.”

The USSR judge vigorously dissented on the three acquittals, which sparked protest demonstrations in the Soviet zone of Germany. Hirsch points out that the Soviets believed Schacht was let go because “the Anglo-American imperialists needed him to reorganize German industry and finance.”

Trainin and Lemkin had a major impact on the Nuremberg process, as evidenced by their defining the four categories of indictment: participating in a criminal conspiracy against peace; planning wars of aggression; committing war crimes, including genocide; and committing crimes against humanity.

Hirsch makes a convincing case that, despite the Soviet Union having committed war crimes of its own, there would not have been a Nuremberg Trial without its participation.

By
Francine Hirsch
Review by
Rabbi A. James Rudin
Image 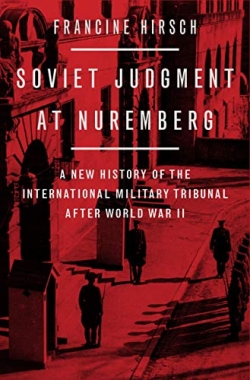