Most of the 90 poems in What Remains (Ben Yehuda Press) grew out of David Curzon's experiences as he has wandered over the face of the earth. Some are touching recollections of precious moments in his life. Some are reflections on what he has learned by standing before great works of art from different centuries and different continents. Some are conversations with people in his life who meant the most to him and who are no longer among the living. And almost every one of them is a gem.

I would like to concentrate on one poem in this collection because of the powerful effect it had on me. The poem's title -- "Psalm 1" -- immediately sets off an association in my mind with the first chapter in the book of Psalms, which contrasts the fates of the wicked and the good. It says there that the wicked are as chaff that the wind blows away, and that the good are like plants that are deeply rooted and live in the shade of God's protection. So, I expect this poem to celebrate goodness and to warn us against the consequences of evil doing. But the poet's first lines defy this expectation. (Note: the text of the original psalm are in italic type.)

Blessed is the man not born

in Lodz in the wrong decade,

who walks not in tree-lined shade,

stands in the way of sinners waiting for

nor sits, if he can sit, in their cattle car,

All of a sudden, with no advance warning, the poet has moved us from the idyllic existence that is promised to good people in Psalm 1 to the grim reality of what life was like for his family in Poland during the Holocaust. They did not walk in tree-lined shade, as the psalmist said they would, but they stood in line waiting to receive their Jewish stars, and they tried to sit, if they could, in the crowded cattle cars that took them to Auschwitz.

The second verse continues the contrast between the promises in Psalm 1and the grim reality that his family experienced:

but his delight is being born

as I was, in Australia, far away,

and on God's law does he meditate night and day.

The reader wonders: What do you find if you meditate on this law of God after Auschwitz? Do you find promises that reassure you that the good will be rewarded? Or do you find a glaring contrast between these words and what you know from your own life?

the land where it is planted,

that yields its fruit by reason

of sun and rain in season.

Is that true? Are his people really granted a claim to belong to the land where they have tried to strike roots for so long? Have their efforts been successful because the laws of nature operate in the world and enable the hard worker to succeed? Or not?

The wicked are not so, they

burn their uniforms and go their way.

According to Psalm 1, the wicked are supposed to be blown away, but instead they get away, burning their Nazi uniforms and taking on new identities.

who offered fruit which God chose to disdain.

And the way of the righteous is Abel's, whose

and who was murdered anyway.

The last line is brutal and painful. It says that if you meditate in God's law as you are supposed to, you will find that the injustice and the arbitrariness and the cruelty that you find in this real world in which you live and reflected in the Bible too, if you read it honestly. It is found right at the very beginning of the book when Abel, whose offering God chooses, is murdered anyway, while Cain, whom God disdained, lives.

You come to that last line and the only word that comes to your mind is: "Ouch!" What a bitter reflection this is. And what an irony to name it "Psalm 1" when its message is the very opposite of what that psalm says.

David Curzon is a man who cares about what is written in the Bible, and yet this poem challenges Torah with the strongest possible words in his poetic arsenal. You have to catch your breath after reading this poem before going to read many of the other poems in this collection, which are refreshingly satirical, lighthearted, or life affirming.

Rabbi Jack Riemer has taught rabbis at sermon seminars throughout North America. His prayers appear in the High Holy Day prayer books of the Conservative and Reform movements. He has published two collections of his favorite sermons: Finding God in Unexpected Places: Wisdom for Everyone from the Jewish Tradition and The Day I Met My Father Isaac at the Supermarket: And Other Encounters with Biblical Tales. 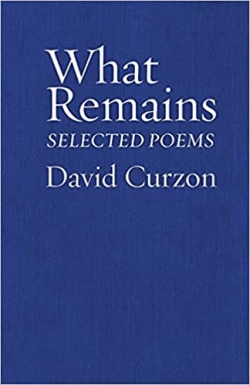