When I reflect on NFTY in the ‘80s, I would revise Ha’am’s quote to:

I cannot speak for all who were involved in NFTY in the ‘80s, but for me, NFTY was a holy sanctuary – it was what I would refer to as a beit midrash (house of study), beit t’filah (house of prayer), and a beit k’neset (house of meeting), all in one. Teens in the ‘80s were learning about Judaism ‘on the go.’ We were the “Walkman generation.” Finally, we could take music with us. This represented more than just music on the go ― for us it was the beginning of portable Judaism. I practiced for my bat mitzvah service with a cassette tape in my Walkman. I could play my tapes of NFTY I, II, III, IV, V, and my MoVFTY mix tapes over and over in the car, on a walk, and at NFTY events. Our music and our experiences were not limited to places where a music box could be plugged in; rather, they were everywhere. We were learning that Judaism was not limited to our homes and synagogues―it could be taken with us.
By Terry Hendin Some 65 people ranging in age from a few months to 95 years old gathered in Jerusalem’s Kiryat Hayovel neighborhood on Monday, May 19, 2014 at the Kehilat HaDror Community Garden.  The Kiryat Hayovel neighborhood was the home to our colleague, mentor, teacher and f
If you watched the Academy Awards this year, the film title Facing Fear may sound familiar. If you were in JFTY in the late 1980’s, the film’s producer/director’s name - Jason Cohen - may sound familiar.
The High Holidays are a special time in the Jewish calendar, a time when many unaffiliated Jews (those who are not members of a congregation) may feel the need to connect to the broader Jewish community. Even if they don’t attend synagogue throughout the year, the High Holidays may inspire these individuals and their families to find a congregation where they can attend services or special holiday programming. There are several ways to leverage your congregation’s communications tools and human resources to make your synagogue more welcoming to unaffiliated Jews, especially leading up to the High Holidays.
By Hope Chernak, RJE The early 2000s provided many opportunities for teen voices and NFTY,the Reform Jewish Youth Movement initiatives to be implemented in the Reform movement. I joined the NFTY staff in 1999 and witnessed incredible moments during my eight years with NFTY’s teen leadership The first time I saw firsthand how our teens could influence our Reform Movement was in 2001 when NFTY President Ashley Habas established teen task forces at Kutz Camp to work on NFTY programming. The topics covered globalization, teen issues, Israel, and life after NFTY (i.e., college life). The task forces presented the opinions of teens from across North America to the adult leadership of the Reform Movement, which impacted their decisions and shaped NFTY programming. At the same time, NFTY began to use online list servs; monitored by the regional officers, they collected the content to create a NFTY website which became a forum for all Temple Youth Groups to post and share resources.
On July 27th, a group Reform Rabbis from throughout North America representing the Central Conference of American Rabbis (CCAR) plan to begin a mission to Israel in an expression of solidarity and support. Says Rabbi Richard Block, senior rabbi of the Temple-Tifereth Israel in Beachwood, Ohio, who is president of the CCAR and a leader of the trip,

We know that the timing of this mission may not be convenient. But we also know this: Our presence in Israel, at this critical juncture, as North American Reform Rabbis, especially our interaction with some of those most directly impacted by recent events, will demonstrate more eloquently to the people of Israel than anything else we could say or do that they are not alone in this struggle, that the Central Conference of American Rabbis stands with the State of Israel and all its citizens in good times and bad.

By Eva Turner This summer at URJ’s Kutz Camp was the second year I chose the Songleading Major. Many people asked, “why do the same major again?” to which I always responded, “I need new music.” In truth, I decided to participate in songleading for a second time because I believe you can never learn everything and there is always room for improvement. And I was completely right. The most important lesson I’ve learned in my two years as a songleader I learned this past summer. That lesson is as follows: The most important part of songleading is education.
Image 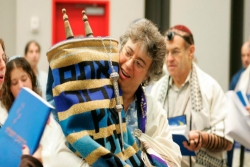 Rosh HaShanah, the Jewish new year, begins Sunday, September 29, at sundown. As we prepare, emotionally and spiritually, for these Days of Awe, we offer three prayers for the season. 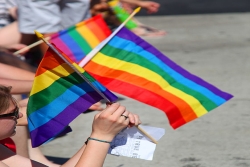 On March 23, North Carolina Governor Pat McCrory signed what has since been labelled “one of the most anti-LGBT bills in the nation” into law.