Tracks of Time in Jamaican Sands 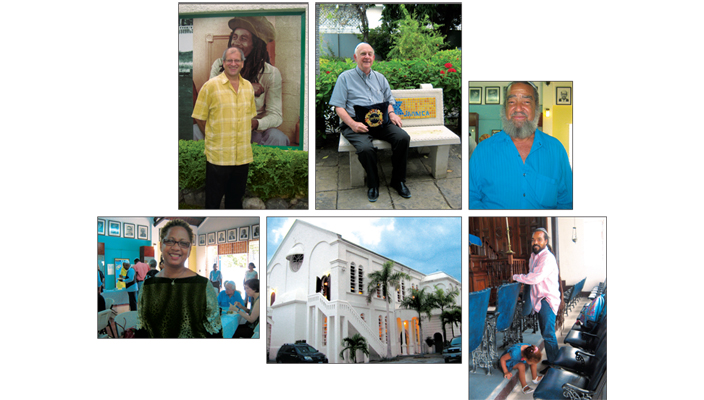 At Congregation Sha’are Shalom in Kingston, Jamaica, we experienced a Jewish community the likes of which are not to be found anywhere else in the world. Where else does a community’s “Prayer for the People” conclude with an homage to “One Love,” the anthem of Jamaica’s late reggae star Bob Marley: “May the people of our country be safe from strife and affliction and may we…join together in one love, one heart, and let us say amen.”

The last functioning synagogue in Jamaica, a stately white building, looks somewhat out of place in the run-down neighborhood of Central Kingston. Most of the city’s Jews had lived here 100 years ago, but later moved to more affluent parts of the city.

Entering the sanctuary, we found the floor covered in sand, a practice of unknown origin shared by only four other functioning synagogues in the world. Some say the sand came into use to muffle the sounds of marranos, forcibly baptized Jews who continued to practice Judaism in secret. Others believe it symbolizes the sand of the Sinai Desert in the Exodus story. Still others say it was to absorb the mud tracked in from the outside. We devised our own theory while watching three-year-old Gabrielle playing with her toy pony on the sand-filled floor — a sandbox to keep children occupied.

Gabrielle’s father, William Rennalls, 41, who wears a kippah over his flowing dreadlocks, worships weekly at Sha’are Shalom, although he is not Jewish. When asked what draws him to the synagogue, he explained that he follows the teaching, “For I give you a good doctrine, forsake ye not my Torah” (Prov. 4:2). He hopes that Gabrielle “may grow in the Jewish faith and become a bat mitzvah.”

One of the congregation’s elder statesmen, Ainsley Henriques, a man of aristocratic bearing and sharp wit, introduced himself to us as “the Jewish genealogy of Jamaican Jewry.” After all, he told us, “I have been here for about 250 years. I am not as old as I look.” Ainsley, actually 75, traces his ancestry in Jamaica to Raphael Cohen Belinfante, a Hebrew teacher who arrived on the island from Amsterdam in 1745.

For Ainsley, as with other congregants we met, veneration of one’s ancestors seems to tie him to the Jewish community as much as religious conviction. Past and present here are inexorably linked. Member Jennifer Millicent Lim proudly showed us her family tree, pointing out her earliest known ancestor, Gabriel Pinedo, born in 1652. The congregation’s prayer book, an amalgam of prayers in Hebrew (with transliteration) and English (drawn mostly from Sephardic as well as British and American Reform sources), documents historical communal milestones, telling us on the very first page that it was “established in secret by marranos fleeing the Inquisition during the Spanish rule….” The subsequent 15 pages present a history of Sha’are Shalom’s predecessor synagogues, including photographs of the original buildings and noting the various causes of their demise — earthquakes, fires, hurricanes, and/or factionalism.

Today’s Jamaican Jewish community is considerably smaller than it was in its heyday in the mid-19th century, when Jews who prospered from international trade and commerce had the financial wherewithal to maintain a half dozen synagogues here. Over the next 150 years, assimilation and emigration reduced the organized Jewish community from approximately 2,500 individuals to 200 today. The attrition has continued, as most young people leave for college and do not return. Ainsley’s three daughters, for example, now live in Boston, Manhattan, and Syracuse.

“Fifty years ago,” Ainsley lamented, “we filled our synagogue’s 350–400 seats, especially on the High Holy Days; now only 70–80 worshipers come. On Friday night, about 50 people used to attend; now we get half that number. And we no longer have enough children to run our religious school.”

With the congregation’s diminishing demographic, the Board of Directors faces the challenge of deciding how far to diverge from the traditions that have defined and governed this community while still preserving its inherited cultural identity.

Rabbi Dana Evan Kaplan, who moved to Jamaica from the United States in 2011 to become the congregation’s first ordained rabbi in 33 years, believes that a promising way to grow Sha’are Shalom would be through outreach to non-Jews. He wants, he told us, “to build a multiracial community in Jamaica that can be a model for the world.” Early in his tenure, the congregation’s lay-led beth din permitted him to officiate at six conversions. He estimates that an additional 20 candidates are interested in becoming Jews, but the beth din has yet to interview any of them. Rabbi Kaplan believes that the committee is more interested in “bringing back people of Jewish descent who were lost, and thereby preserving the seed of Israel.”

Ainsley told us that his first wife, the late Sheila Chung, was the first woman of color (Chinese, Indian, African, and Scottish) to be converted to Judaism in Jamaica. “Racism,” he explained “is not an issue in Jamaica; class is an issue.” Rabbi Kaplan pointed out that “the six recent converts, of various racial and ethnic backgrounds, are all in the upper class of Jamaican society.”

Patrick Mudahy is one of the congregation’s most vocal critics of Rabbi Kaplan’s conversion efforts. “We have to be careful who we take in,” he told us. “We have to maintain our blood line.” A born Jew who had been raised as a Christian, Patrick returned to “the faith of my ancestors” as an adult seeking connection to his roots in the aftermath of marital difficulties. When asked how the community could survive without an infusion of new blood, he responded, “Like Masada, it is better to die in honor than to die in shame.”

On the Friday night we attended services, Rabbi Kaplan delivered an impassioned sermon warning that the congregation’s very future depended upon breaking the impasse between what he termed the “conservationists” and “innovationists.” The rabbi hopes to convince the “conservationists” to add contemporary Jamaican culture, such as reggae music, to the congregation’s cherished Sephardic and Classical Reform traditions, because he believes it will appeal to the younger generation. His “Prayer for the People of Jamaica” and his introduction of Debbie Friedman’s Mi Shebeirach have gone largely unopposed by the “conservationists,” but most of his other innovations, such as adding the matriarchs to the recitation of the Amidah prayer, have met with strong resistance. When one influential member heard the rabbi invoke the name of the matriarch Sarah, he walked out of the sanctuary in protest.

Why, we asked, would a congregation where women receive aliyot and sit alongside men in the sanctuary be so opposed to a liturgical change reflecting gender equality? “What’s written in the prayer book is perceived by the ‘conservationists’ as received truth,” Rabbi Kaplan said. “Any deviation from that is seen as a termination of their traditions.” Ainsley told us that because change is so controversial here, it has to be handled through a deliberate process managed by the congregation’s directors rather than imposed in an ad-hoc manner. The last major change came about 30 plus years ago, he said, “when we recognized women as equals for religious practices.” The decision to allow mixed seating, he explained, went back to 1921, when a number of synagogues of various traditions merged in the aftermath of the great Kingston fire.

Ainsley, founder of Jamaica’s Jewish Genealogy Society and chairman of the nation’s National Heritage Trust, walked us through the Jewish cemetery at Hunt’s Bay, which served the Jews of Port Royal until 1692, when an earthquake destroyed the city. Its 359 tombstones, which date from the 1670s to early 1700s, are inscribed in Spanish and Hebrew and oriented eastward toward Jerusalem. Among those buried here are “Snr. Moses Cohen Henriques (Esther),” believed to be the wife of one of the most famous Jewish pirate warriors, Moses Cohen Henriques, who aided the Dutch in capturing the Spanish silver fleet and in invading Brazil. Like other Jewish pirates of the time, Moses Henriques had a score to settle with Spain and Portugal: His parents had suffered under the Inquisition and had to flee to Amsterdam.

We also visited the walled Jewish cemetery in the port city of Falmouth, where 113 Jews are buried. Its caretaker, Marina Delfos, told us that a cholera epidemic in the 1850s had resulted in dozens of deaths and the exodus of many of the city’s Jews. Among the probable victims of the epidemic was the physician Lewis Ashenhiem, who died at age 42. His descendant, Sir Neville Noel Ashenheim (1900–1984), served as Jamaica’s first ambassador to the U.S. after the nation won its independence from Great Britain in 1962.

Despite many devastating natural disasters, generations of Jews have, through time, left indelible tracks on the Jamaican landscape. Today, serious challenges face the leaders of this dwindling community, but, hopefully they will find a way to join together, in Bob Marley’s words, in “one love, one heart,” and become a living model of how to integrate traditions and peoples in our increasingly multicultural world.