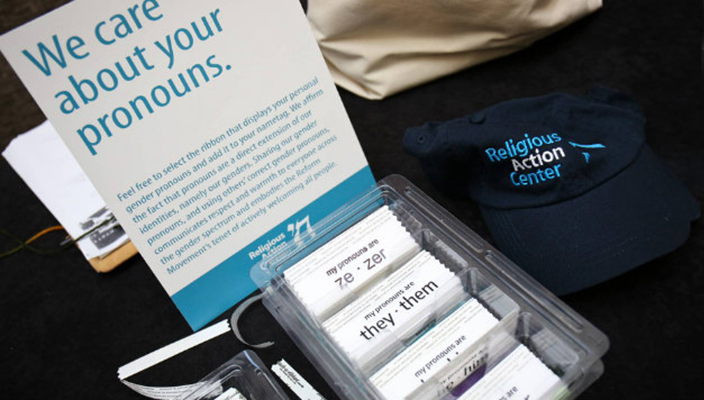 Perhaps you’ve been to a Shabbat service, a congregational speaking event, or even at a work function where you heard someone include their pronouns while introducing themselves, i.e. “Hello, my name is Rachel, and my pronouns are she, her, and hers.” You may have also seen instances of people including their pronouns on their email signatures, badges, and name tags at communal functions.

You might wonder, “Why is including my pronouns important? Won’t people know my pronouns just by looking at me?”

Individuals who are cisgender (cis) – that is to say, those who identify with the gender they were assigned at birth – rarely have to think about their pronouns, However, individuals who, are transgender, gender non-conforming, and gender non-binary are often addressed with incorrect pronouns, both intentionally and accidentally, which contributes to their invalidation and erasure of their identities and further perpetuates cis/heteronormative societal structures.

Sharing our pronouns showcases part of our identities, especially when it comes to our gender identities. Our communities include people of varying gender identities, and they all have their own sets of pronouns. Referring to individuals using their correct pronouns conveys respect and validation to everyone in our communities – part of the Jewish imperative to treat others’ the way we wish to be treated.

Might the Jewish imperative to treat others as we wish to be treated apply to gender identity, as well? After all, if each of us wishes to be treated with respect for our own authentic identities, surely it is in alignment with our Jewish values to respect others’ identities, as well.

When we introduce ourselves by sharing our pronouns, we more equally share responsibility for building these relationships with people who are different from us. Such actions are a powerful demonstration of allyship and a recognition of those most marginalized in our communities and the issues they face.

Sinclair Sexsmith (they/them pronouns), a gender non-binary journalist, explains how such a seemingly small act can go a long way:

“When you do that, I feel more comfortable being visibly out as nonbinary. When we’re doing the socializing part of whatever event we’re at, and we are introduced, I automatically feel warmer toward you –  regardless of your gender or presentation. I feel much more comfortable talking to you, because you already tell me you know a little about gender. Thank you.”

There is precedence for Judaism acknowledging different gender identities.  Jewish scholars in ancient times acknowledged a wider diversity of gender than the male/female binary. In fact, Jewish texts contain more than 1,600 references to people outside of the gender binary.

Modern-day Reform Judaism, in particular, understands that, to be their authentic selves, many people identify as transgender, non-binary, or gender non-conforming. In 2015, the Union for Reform Judaism adopted its historic “Resolution on the Rights of Transgender and Gender Non-Conforming People,” expressing our community’s collective commitment to the full equality, inclusion and acceptance of people of all gender identities and gender expressions.

The Union for Reform Judaism’s audacious hospitality work aims to meet the needs of everyone in our community, including those who are currently in the margins of our Jewish community – and recognizes that doing so, in part, requires respecting the personal autonomy of everyone within our communities. One way to do that is by acknowledging and using individuals’ correct pronouns.

The next time you introduce yourself, consider sharing your gender pronouns too. Whether verbally, in an email signature, or on a nametag, adding she/her/hers, he/him/his, or they/them/theirs (a common gender-neutral pronoun) to your introductions helps balance your relationships by creating a way for everyone to share an expression of their gender identity.

Doing so also communicates your awareness of the variety and fluidity of gender identity, even if you are not currently aware of any trans, non-binary, or gender non-conforming people in your community. Your actions can provide them a safe way to articulate their identity – one that others already understand.

This practice not only provides a warm welcome but also helps create a comfortable environment in which people can be their true selves in authentic relationship with others.