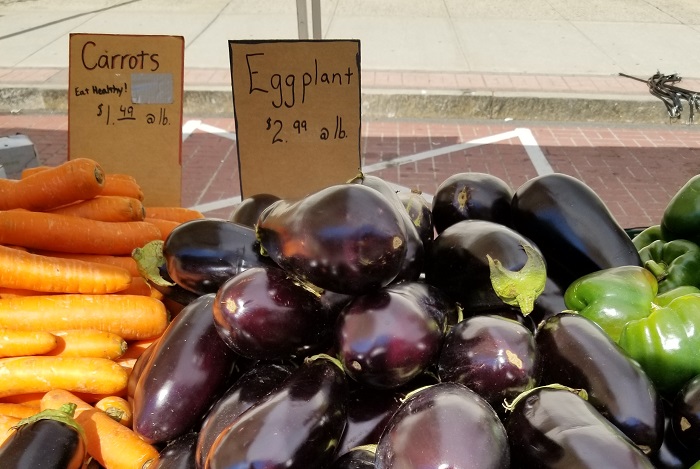 As a kid, I had no interest in eggplant. I mean, it’s purple, and what does it have to do with eggs, anyway? One day—I might have been a young teen—my mother made ratatouille. I suspect she was inspired by Julia Child’s public television program, although my mother’s version would have been a simplified preparation. In any case, mom’s ratatouille was an immediate hit and became a family favorite.

My family lived in Pittsburgh’s urban-residential Squirrel Hill neighborhood, but we routinely stopped at roadside produce stands and shopped at the East Liberty farmers’ market. In late summer through fall, round, shiny, and very purple eggplant were abundant.

When my high school friends and I started “dining out” together, we favored middle eastern restaurants.The food was tasty and inexpensive; a couple of menu items—typically babaganoush and hummus - plus a few pitas could feed four or five. (Two of our favorite restaurants are still there!) Eggplant-based babaganoush became a mainstay.  Also, it’s easy to replicate at home. (Recipe below.)

During my gap year in Israel, our group planted and then picked eggplant (hatzilim חצילים), along with tomatoes, cucumbers, and peppers on Kibbutz Ein Gedi in the Judean Desert. Even now, when I reminisce with a friend from that trip, eggplants always enter the conversation. That experience inspired an eggplant recipe I created - with the added feature of roasted  locally grown cherry tomatoes--which I call  “roasted eggplant+.”  (See below.)

I associate hatzilim with some of my best memories, memories that feature family, friends, and a good harvest, and I show my appreciation by reciting the traditional blessing over vegetables:

Baruch ata Adonai Eloheinu melech ha’olam borei p’ri ha’adamah.
Blessed are You, Adonai our God, Sovereign of all, who creates the fruit of the ground.

And then, non-traditionally, why not add the blessing for miscellaneous food because it can encompass the bounty of good friends, of good memories, and of the land:

Baruch ata Adonai Eloheinu melech ha’olam shehakol niyah bidvaro.
Blessed are You, Adonai our God, Sovereign of all, at whose word all came to be.

Remove eggplant’s stem and slice in half lengthwise. Place face down on a foil-lined baking sheet.  In one corner of the baking sheet, place the garlic, cut side up and lightly drizzled with olive oil. Roast at 425o F (or 400o F in a toaster oven) until the eggplant is soft throughout (about 30 minutes).

Let cool, then scoop eggplant flesh into a bowl or food processor, adding 2-3 cloves of garlic squeezed from the papery skin. Chop with a knife, mash with a fork, or pulse a few times to combine but not pulverize.

Add tahini, a tablespoon of olive oil, lemon juice, and salt to the eggplant mixture and stir well. If it seems thick, add water, 1 teaspoon at a time until desired consistency. Adjust salt to taste. Decant to a serving bowl. Drizzle on a bit of olive oil and sprinkle zaatar. Serve with pita wedges, pita chips, crackers, or sliced vegetables.

Rinse cherry tomatoes, place in foil-lined baking dish, drizzle 1 tablespoon olive oil on top, sprinkle with salt, and roast in that same oven for 10 minutes, until tomatoes are soft, brown, and mostly popped. (Working in batches, eggplant and tomatoes can be roasted equally well in a toaster oven.)

Chop, mash, or process the roasted tomatoes with the eggplant. Add tablespoon of olive oil and mix. If it seems thick, add water, 1 teaspoon at a time until desired consistency. Adjust salt to taste. Decant to a serving bowl. Drizzle on a bit of olive oil. Serve with pita wedges, pita chips, crackers, or sliced vegetables.

Michele Braun is currently studying for an MA in Jewish Education at  Hebrew University in Jerusalem.  She is also an art student and practices the ancient craft of tapestry making. She and her family are currently members at Westchester Reform Temple in Scarsdale, NY, where she occasionally leads Torah study.